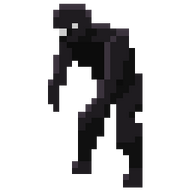 The Ghoul is one of the enemies in Wizard of Legend.

Aside from ranking, the Ghoul does not have any variants.

When the Ghoul uses its blue aura and charges the player, damaging it will stop the charge and stun it temporarily. Close range Basic Arcana have proven effective against the charge.

Large groups of Ghouls will tend to rush the player and are capable of stun-locking them in certain situations. There is generally no way to avoid death in this case, so the player should be wary of enclosed spaces when facing this enemy.