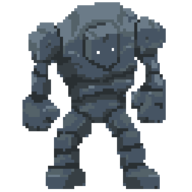 The Golem is one of the enemies in Wizard of Legend. It is rarely seen, and is usually present on the level prior to the player's arrival, as opposed to being summoned in as a card.

The Golem's sole attack is a forward punch, which has a short but noticeable wind-up time.

Constantly press the attack, and once it pulls his arm back, dash through him and attack from the other side, and repeat until it dies.

The Golem is immune to all forms of knockback, stun, or other crowd control Keep this in mind when using long arcana that would stun normal enemies, such as

If you listen closely, there is a sound that The Golem makes before attacking.