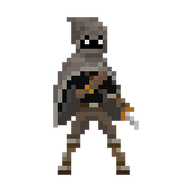 The Rogue is one of the enemies in Wizard of Legend.

They have among the lowest health, but can easily take a chunk of health out of a reckless player.

Their melee slash will always deal a critical if it hits the player's back.

Rogues appear as a transparent grey silhouette when invisible.