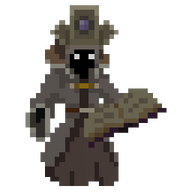 The Summoner is one of the enemies in Wizard of Legend.

It's best to use Area of Effect arcana, that will disable the summoned enemies, and hurt the sorcerer as well.

Defeating all the enemies summoned by a Summoner will stun it.

Elemental variants of the Summoner should be prioritised above other enemies so prevent them from summoning their dangerous agents, seekers and zoners.

Since the elemental variants summon only one agent at a time they can be easily stunned by taking out the low-health agent.

Elemental summoners were added in the Thundering Keep Update.